I made Cypherbot in response to robot kits.  I think it's a question of where to put the money.  It's silly making some stultifying, over-priced, "colour inside the lines" kit the gateway to meaningful experiments and experience.  It's a combination of the grand and the humble.  If a builder has any character, genuine imagination or desire then this is the venue for those qualities to shine.

Make it?  Make it happen.
[My fab tools are a drill press, a cross-cut file, a Dremel, and a nibbler.]

I proceeded in stages, the entire project didn't come about all at once.  It was a step-by-step process.  That much should be evident from the pictures.  The project's impetus was "National Robotics Week" and the afflatus was demonstrating to the clueless how to get something done (like anything else - you take a step, and then another, repeat.)

The base is a piece of plastic from my 'scrap bin'.

Cypherbot goes about with Parallax-Futaba continuous rotation servos firmly stuck onto the base with U-Glu strips.  The servos get their signals from a Parallax ServoPal.  The wheels were made from jar lids and I got the 'traction bands' from the blood bank. 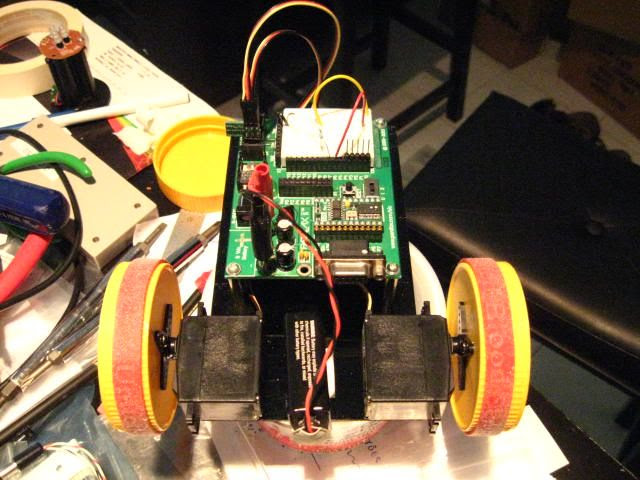 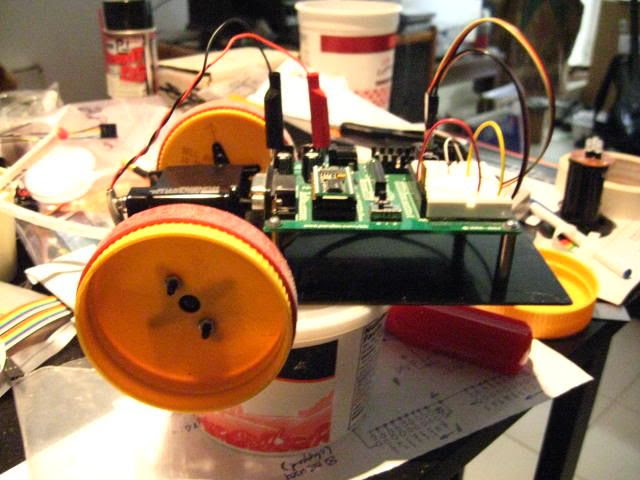 It started as a tail-dragger and I used a marble, but it couldn't deal with expansion joints (in concrete) and the like.  So, I tracked down a tailwheel at the local Hobby Bench and fab'd a bracket from a piece of aluminum scrap. 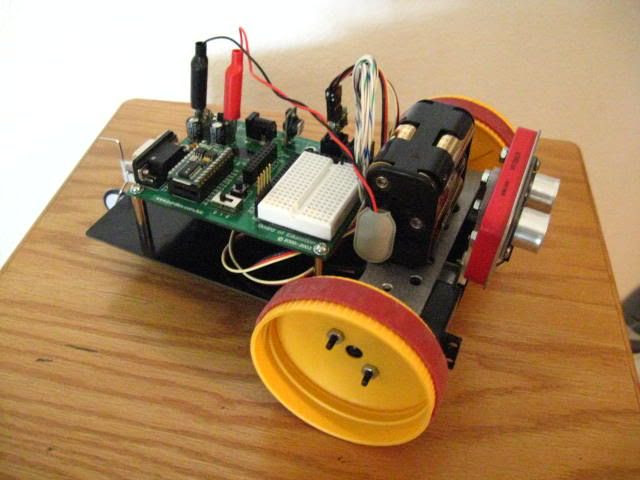 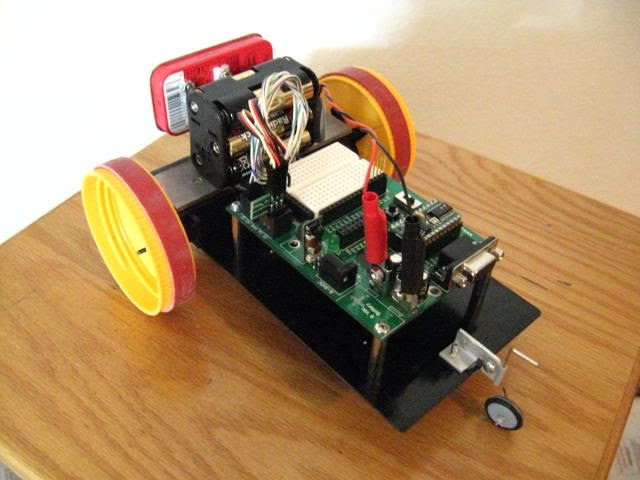 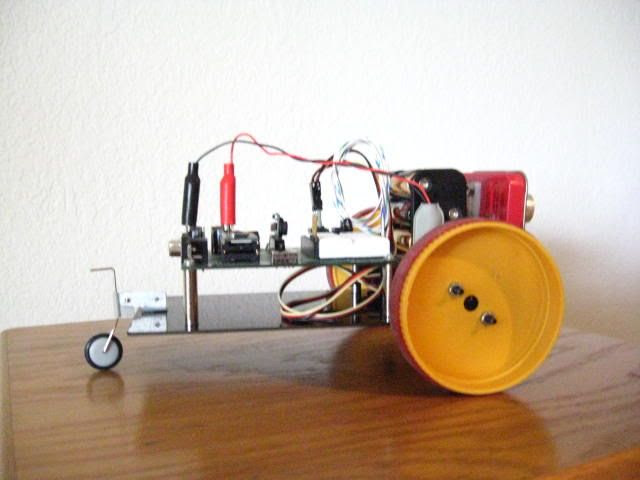 In 'autonomous' mode, Cypherbot journeys with obstacle sensing from a sweeping Parallax Ping module, housed in a familiar candy tin, mounted to a standard servo.  This sweeping servo is controlled by a servo routine.  Its additional demand proved just a stretch for the new 7805SR, so I just used a 7805 for its reg supply.  Any concern for inefficiency is offset by the relatively light draw from it.  I ought to bolster the obstacle avoidance with IR sensors.  But running it around with the remote (where it stops being a "robot" and starts being an RC car) is the most fun. 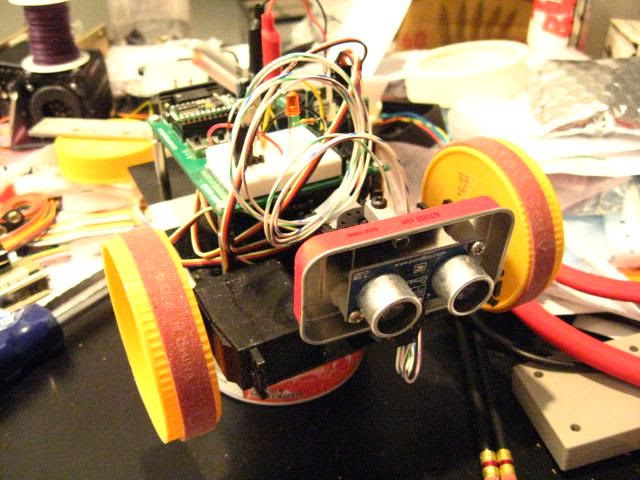 Its travelling around, trying to avoid thus and sundry, was interesting enough.  I'd had the idea to run it remote controlled and the XBee modules now available from Parallax proved ideally suited to the task.  They run from 3V and though I could've made do with a LM317L I got extravagant with a 7803SR (Mouser).  I think these little switchers are the best.  I fab'd a little board for the XBee, with a 3v-5v level shifter and the switcher. 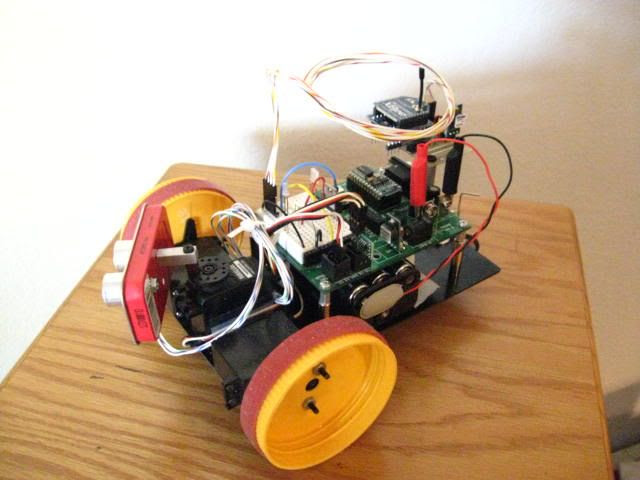 The transmitter is composed of a Parallax SX28 (my "Idea Box") programmed to read an Atari keyboard that I got from a surplus supplier and then generating control codes of my own devise.  The keyboard has a 74C923 which made interfacing easy enough.  Similar to the receiver, there's an XBee and a 3v-5v level shifter along with another 7803SR.  The "Idea Box" uses a 9V transistor battery, so the 7803SR isn't such an extravagance. 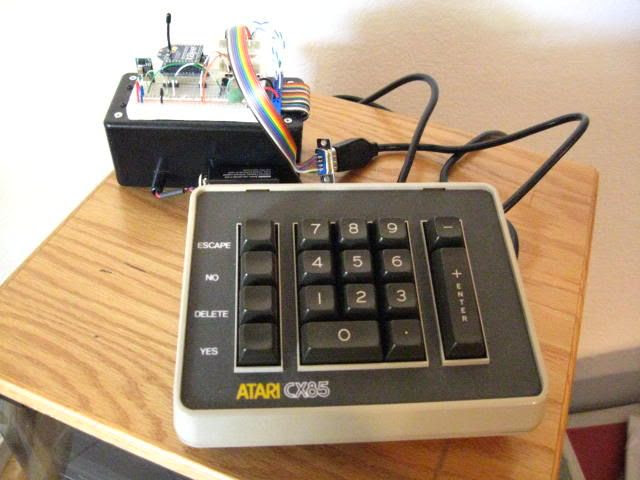 I need to situate an SX28 into the keyboard enclosure.  The keyboard enclosure is held together with four self-tapping screws that go into plastic posts (not reinforced) which leaves me wanting to keep the battery external.  So, for now, it's all separate pending further review.  If you have to have everything perfect before you try anything then you'll likely do nothing; you have to start somewhere - perfect as you go along.

I make my cables on the long-side, admittedly - better too long (bundle it as necessary) than too short.  A little more utility for use elsewhere.
(Both the RX and TX use the "out-of-the-box" 9600, 8N1 serial mode.  No dicking around required.)

Since the battery/power would necessarily be kept external, owing to my loathing of rechargeables (so-called) and all of the lying that goes with them, I decided to keep everything external.
I dispensed with the 7803SR and got 3V (3.15V, actually) for the XBee dropping voltage across 3 diodes coming off the 7805SR (an LED "on" indicator keeps that in good conduction.)  Efficiency is a consideration, but it isn't everything, it feeds off the switcher anyway.

The grand solution takes the form of a "pod" attached underneath. 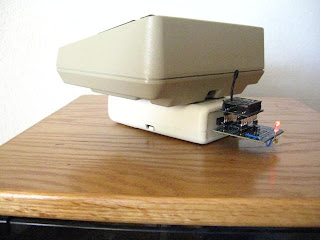 I went modular by placing the XBee on a pluggable card. 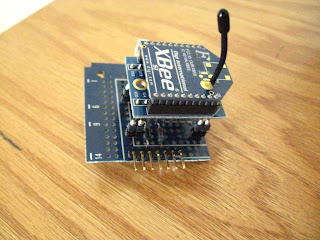 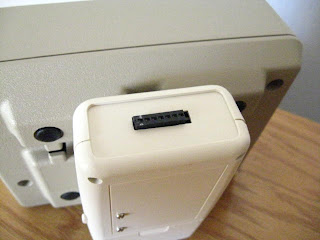 I removed the Atari's 9-pin D cable and leaded that all out to the microprocessor board with rainbow cable and Molex C-Grid connectors. 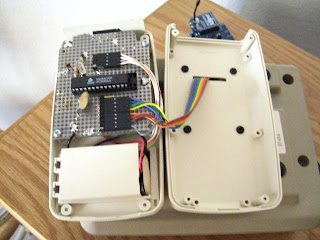 I leaded out the programming header and had room enough to stuff that into the battery compartment, no disassembly required for "firmware mods". 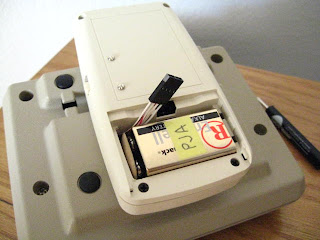 There you have it! 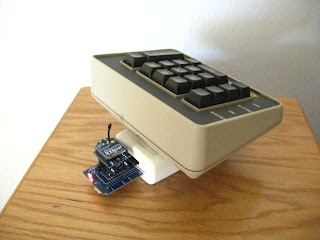 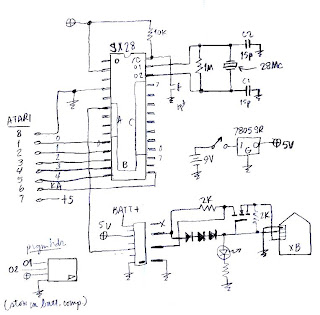